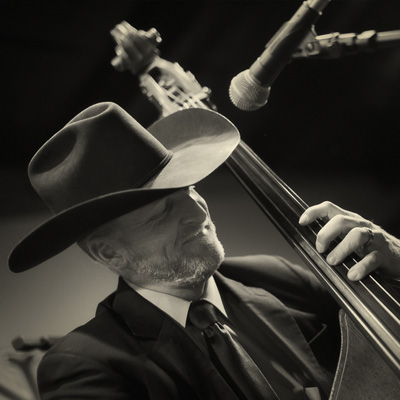 Jake Hooker was born listening to the sounds of traditional country music through his father's west Texas country band. Jake began playing the bass at the age of seven and practiced diligently until he mastered the honky tonk sound. Jake formed his own band at the age of 14 and began performing. By the age of 18, Jake was playing bass and singing full time. He spent some time at South Plains College in Levelland, Texas, studying music and theory. Jake moved to the Fort Worth area in 1998 where he quickly became the local favorite. Jake signed with Southland Records that same year and began recording. Jake's popularity continues to grow. His love and passion for traditional country music never ceases. He feels it is necessary to relay that love to the fans who are so dedicated to it as well. There is no doubt that Jake is strongly influenced by the sounds of Ray Price, Johnny Bush, Farron Young, Curtis Potter, Leon Rausch and Darrell McCall. He spends much of his spare time studying these artists' music in depth. Jake is consumed by his dedication to the music and his hobbies include playing the drums and learning the steel guitar. Jake's graceful and professional image on the bandstand, along with his voice and talented band, make his show unbeatable. 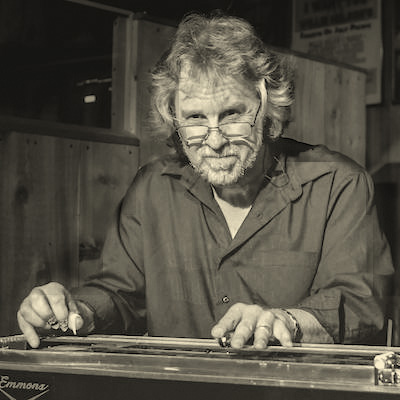 Tommy Detamore is an acclaimed engineer, producer, musician, and owner of Cherry Ridge Studio in Floresville, Texas. He has engineered, produced, and mastered over 150 albums, and has played steel guitar, electric guitar, acoustic guitar, dobro, and mandolin on well over 300 albums to date. He has recorded and produced numerous top-ten hits on the Americana and Texas Music charts.

In 2001 Tommy engineered a recording that received a Grammy nomination for “Best Country Instrumental”. The song was Bill Kirchen’s “Poultry in Motion”.

In 2008 the Academy of Western Artists named him Record Producer of the Year.

In 1976, he took up the pedal steel guitar and began studying with steel guitar great Buddy Charleton. All throughout his high school, college and post-college years Tommy played guitar and later pedal steel guitar in area bands until 1981, when he moved to Texas to play steel guitar with Darrell McCall. The following year he joined Moe Bandy's band, and toured extensively for the next seven years in Europe and the U.S., while also making numerous live television and radio appearances including The Grand Ole Opry, Hee Haw, Nashville Now, and New Country.

In 1991 Tommy founded Cherry Ridge Studio in Floresville, Texas, where he began making his own demos as well as and demos and albums for other clients.

Always active in church music, Tommy has played guitar and steel guitar at San Antonio’s Trinity Baptist Church, served as Pastor of Music at Floresville’s Oak Hills Baptist Church, and served as chief sound engineer as well as a frequent instrumentalist at the First Baptist Church in Floresville. He currently plays guitar in the church band at Life Church in La Vernia, Texas.

Tommy and his wife, Sandy, live near Floresville. Sandy owns and operates "Drama Kids of Greater San Antonio”, a company devoted to the development of life skills through drama for children and young adults. They have one son, Thomas, who works for "Drama Kids" as a teacher and administrative assistant. 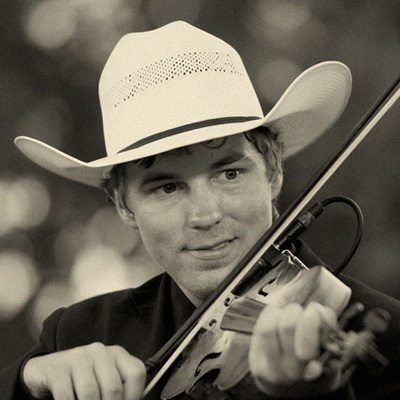 At age six, Jess Meador 'found his calling' when he started fiddle lessons with world champion fiddler Dale Morris, Sr. When Jess was about ten he fell in love with the Western Swing Music of Bob Wills and the Texas Playboys and the honky-tonk sounds of greats Ray Price, Johnny Bush, and Faron Young. This sparked his desire to not be just a ‘breakdown player’ but to ‘play in a band’. Luckily he was given this chance. At age 10 Jess got his first band job with Aris Cook. Needless to say he was the smallest band member but held his own and hasn‘t missed a beat since. When Jess was about 12 he also began playing with Bill Gilbert and ‘The Boys’ at Bill’s famous Wednesday Night Jam. This jam was the ‘icing on the cake’ to further his love for playing swing and the oldies and is what stirred his interest to play jazz. No doubt all these experiences in his early playing years contributed to the successful career that he has today. Now, about twelve years from his first lesson, Jess is a favorite among the honky-tonk and dancehall crowds in the North Texas area and is noted for his versatility, ability to improvise, and also to play twin fiddle and two- and three-part harmony. Jess has been a regular band member for Tommy Hooker, Landon Dodd, Johnny Bush; Dan Roberts; Kinneth Doyle; Dave Alexander; and the Texas Tumbleweeds Swing Band. Plus he is a fill-in for many others including Tommy Allsup and the Texas Playboys, Durwood Strube, Jerry Webb, Bubba Cox, and Chad Rueffer. He has made duo and trio appearances with greats Devon Dawson, Randy “Snuffy” Elmore, Rich O’Brien, Buck Reams, and others. In addition to the four-string and five-string fiddle, Jess plays the electric mandolin and guitar. He also does session work. Jess has won many awards and honors including Texas State Junior Fiddle Champion, Junior World Fiddle Champion, the Red Steagall Cowboy Gathering Champion Fiddler, and the Cowtown Society of Western Swing' Rising Star Awards. Needless to say, he is a REAL asset to the Outsiders and we are so excited and proud to have him on board! 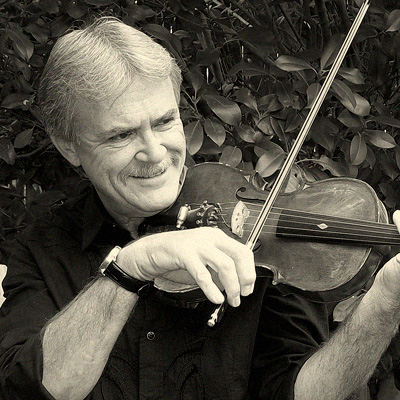 Hank was born in Slaton, Texas and was barely out of high school when his mentor, Red Hayes, recommended him to Country star Faron Young as a replacement for Vassar Clements. Within a few months, Hank had played on his first #1 record - Faron Young's recording of "Four in the Morning."

He has recently relocated to his native Texas to continue playing the traditional country music he loves. 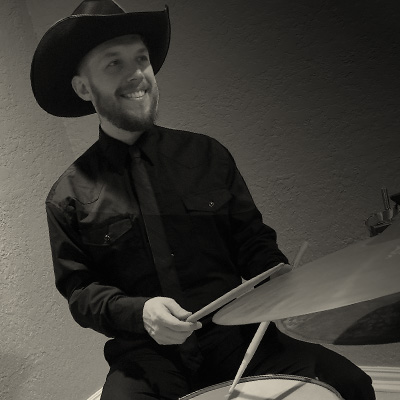 Brian Dunn was born in San Angelo, Texas and was raised in the Gulf Coast town of Lake Jackson.  Coming from a family of musicians and performers, it was inevitable that Brian would want in on the family business. At age 3, Brian discovered the thrill of performing while participating in his first piano recital. When his mother, Audry Dunn, who also happened to be a piano teacher, asked him how playing in the recital made him feel, his response was “It made me feel big!”  He was hooked after that.

Brian continued his classical piano education with his grandmother, Katie Hunt, but at age 5, told his parents that he would like to tap dance like Gregory Hines and Gene Kelly.  His parents, Barry and Audry supported this desire to tap dance, although his mother thought to herself, “We don’t dance. We play the music for others to dance to.”  She signed him up with Pure Energy Dance studio where he got the opportunity to perform at the Sammy Davis Jr. Awards on stage at the Wortham Center in Houston and many other tap dancing performances and competitions.  Brian soon discovered that many of the tap dancers that he admired were also drummers, influencing his decision to pick percussion as his first choice when he joined band in the sixth grade. It then became clear to Brian’s parents that the rhythmical components of tap dance were what drew him to it, and was a crucial part of his musical development.

Brian’s grandfather, jazz saxophonist Jim Hunt, took him on his first gig at the age of 11 playing jazz standards with sax, drums, and a piano player. The pianist enjoyed speeding up and slowing down for emotional effect, which forced Brian to learn to open his ears, listen, and to have a musical conversation from his very first gig. Brian continued to gig on kit as well as percussion through his school days, playing in band, jazz band, the Brazosport Symphony Orchestra, many theater productions, and two youth symphonies.  At the age of 15 Brian received the honor of playing at Carnegie Hall. He was also a member of a Stomp style percussion show at Six Flags AstroWorld in Houston when he was 18. Brian was blessed to have studied with acclaimed percussionists Brian Jones, Chris Deviney, and Mike Lefebvre. He now tries to teach his students the valuable lessons and techniques he learned from these great musicians.

After high school, Brian went on to study Music Performance at Brazosport College and University of North Texas, until at age 20, he moved to San Marcos to play with a country cover band. His music journey soon included teaching during the week in Seguin, playing bars around Texas on the weekend, and making it back to Austin to play at a Missionary Baptist Church on Sundays. Some of the notable musicians that Brian has had the opportunity to play with are Haydn Vitera, Jason Allen, The San Antonio Rose Live Band, Mark McKinney, Jarred Birmingham, Latasha Lee and the Blackties, Gary P. Nunn, Davin James and many others of varying genres.  As a session musician, some of the projects that Brian contributed to yielded number 1’s on Texas radio as well as several in the Top 10.

Brian is excited to be touring with Jake Hooker and the Outsiders. He loves making music and tries to spread it wherever he goes.  He considers it an honor to have the opportunity to do this with such great musicians and genuinely good people.  He hopes to see you down the trail.

If you would like to get our Hooker Headlines email update
Click Here For EMAILand get HOOKED UP! 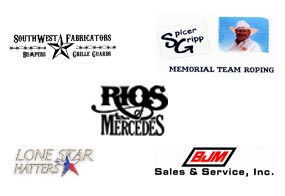